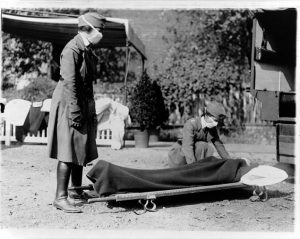 Red Cross Ambulance Drivers caring for the body of an
H1N1 flu victim in Washington, D.C.
Library of Congress

Today’s easy access to international travel spread the novel corona virus at a very fast pace. Learning from the past and applying modern science will hinder COVID-19’s spread. Simply put, human hosts multiply the virus. Just like in 1918-1919, stopping a pandemic means quarantining those that have already contracted the disease, identifying individuals that are carriers, keeping track of those that have recovered, implementing social distancing policies, and restricting travel. How individuals behave can have a dramatic effect on flattening the curb.

In 1918, St. Louis quickly closed businesses, schools, and put restrictions on the everyday lives of its citizens. (https://www.influenzaarchive.org/cities/city-stlouis.html) The city did not escape the virus, but St. Louis weathered the pandemic much better than Philadelphia where, despite strong advice from public health experts, the city decided to go ahead with a liberty bond parade in late September 1918 that attracted more than 100,000 people to the streets. Consequently, Philadelphia was one of the hardest hit cities in the United States. In October, 2019, Philadelphia’s Mütter Museum opened an exhibit telling the sad tale of H1N1. With no deaths in September 1918, more than 12,000 flu victims died within six months and 20,000 died before the H1N1 virus disappeared from Philadelphia. 20,000 may not sound like a lot in a city of over 1.7 million, but bad decisions by officials that ended in 20,000 deaths from the flu brought fear, economic loss, and heartbreak.(http://muttermuseum.org/)

In Philadelphia, the majority of the dead were under 5 years of age, between 20-40, and over 65. Hospitals were overwhelmed and the city’s economy shut down. Health care workers, police, fire fighters, and caretakers were far too many of the victims. After a slow start, officials warned that only quarantine would stop the virus and launched a campaign, “Spit Spreads Death.” In reality, quarantine did work, but “spit” did not spread the virus. Human contact facilitated the spread of disease. Keeping people off the streets and out of the city’s theaters, public spaces, and off public transportation was the answer.

Unfortunately, the heartbreak and fear that hit Philadelphia and the world in 1918-1919 is now easier to understand. COVID-19 has spread even faster than H1N1. Pandemics are inevitable, but clearly preparation and steps to curb the spread of disease can make a difference.

What can we do? Thank and support our heroic neighbors who are working in healthcare, delivering everyday necessities, and keeping essential businesses open. Pressure government to give these heroes what they need to keep themselves and everyone safe. Demand accurate information from all levels of government and plans to dealing with the crisis. And, #stayhome

This entry was posted in Then and Now and tagged COVID-19, H1N1 1918, historymatters. Bookmark the permalink.